What Is the Achilles Tendon?

The Achilles tendon is the strongest tendon in the body – it consists of a tough band of fibrous tissue which connects the calf muscles to the heel bone. Tendinopathy is a type of tendon disorder which is characterised by non-inflammatory degeneration of the tendon with sensations of pain and stiffness. The Achilles tendon is subject to high usage on a daily basis, this results in a significant amount of wear and tear, and subsequent degeneration from overload injuries causing painful symptoms which can significantly interfere with everyday routines and discomfort. 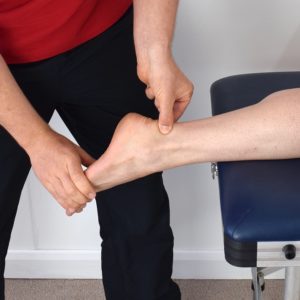 Achilles Tendinopathy is a relatively common disorder, which affects thousands of men and women in the UK every year. Occurrences of Tendinopathy become more prevalent in those who regularly participate in sporting activities such as running, basketball, football, racquet sports, dance, gymnastics, etc. The disorder also appears to primarily affect more men than women and becomes more common after the age of 30.

There are several other factors which may increase the likelihood of developing this kind of pathology, this includes the following:

What Is the Difference Between Tendinopathy and Tendonitis?

Achilles Tendonitis was previously used as a blanket term to describe all disorders of the Achilles tendon and the term continues to be used interchangeably with tendinopathy. However, it is now known that the tendon itself does not usually inflame – on rare occasions the outside sheath of the tendon may become inflamed or irritated resulting in visible swelling – this is known as tendonitis, whereas the term tendinopathy is used to describe any type of problem or disorder involving the tendon.

Sensations of sudden pain in the calf or heel, followed in close succession by swelling and bruising may mean the tendon has been torn.  In some cases, this is accompanied by an audible snap and the individual may also find it difficult to point their toes – this is known as an Achilles Tendon rupture and requires immediate medical attention.

This describes a more complex disorder which relates to inflammation of the bursa and pressure from the back of the heel at the point where the tendon inserts into the heel bone.  A lump may be visible at the back of the heel, and this is often accompanied by swelling and redness.

Tendinopathy can be extremely painful and interfere with daily activities and routines, especially exercise and sport. Typical symptoms include:

In most cases diagnosis will consist of a physical examination evaluating the leg, heel and ankle, as well as a detailed medical history and symptoms to rule out other possible disorders.

In the case of suspected tears in the Achilles Tendon, an MRI scan or Ultrasound may be necessary to confirm the diagnosis. Further diagnostic testing may also be required if there is a chance of arthritis or any other type of disease or degenerative process.

Treatment will depend on the severity of the disorder and the length of time symptoms have been present for. Recovery may take several weeks or even months, the sooner the diagnosis, the more effective treatment will be, with a shorter recovery period.

Applying an ice pack to the tendon at intermittent intervals can help to reduce pain.

Where possible, it is important to rest the affected area and engage in alternative forms of exercise such as swimming, which will not strain the tendon.

In some cases, Achilles Tendinopathy can cause considerable discomfort, over the counter medications such as paracetamol and NSAIDS such as ibuprofen can be helpful in reducing such symptoms. It is important to get advice regarding the most suitable medication from a GP, pharmacist or well-trained physiotherapist.

Targeted physiotherapy including specific exercises and manipulation, can help to strengthen and stretch the Achilles tendon, subsequently relieving symptoms. A well-trained physiotherapist can also help to identify any other factors which may be contributing towards the problem such as postural issues and poor biomechanics.

Patients may also be provided with a home care routine of exercises; this often includes eccentric exercises which consist of heel-lowering and stretching. Such exercises may be painful for the first few weeks – however, symptoms should gradually begin to improve.

If Achilles Tendinopathy is causing serious disruption to everyday life and all conservative treatment methods have proved unsuccessful, surgery may be an option.

Typically, the painful symptoms of Achilles Tendinopathy take several months to settle down, there are however, a number of preventative measures to help reduce the strain.

A podiatrist can analyse walking and running patterns and help to identify any poor biomechanics which may be causing the issue. Orthotics may be necessary for those with flat feet, engaging in high-impact sports.

It is advisable to warm up the muscles prior to exercise and to stretch sufficiently after finishing exercise. Repetitive movements which strain the Achilles tendon should be limited, and as with all forms of exercise, any increase should be gradual and built up slowly.

For more information on how treatment for Achilles Tendinopathy and other sports related injuries, contact ProPhysiotherapy.